From the desk of Brad Zellar, Vice President & Trust Officer

Happy New Year! I will begin with the good news for 2022. As you can imagine, it will be rather brief. Stocks recovered nicely in the fourth quarter from the woes of the first three. The Dow Jones Industrial Average and the Standard & Poor’s 500 Index returned 16.0% and 7.6%, respectively, in the final quarter. The NASDAQ Composite Index was down, but very modestly, at -0.8%.

International stocks performed well too, with the MSCI EAFE Index and the MSCI Emerging Markets Index returning 17.4% and 9.6%, respectively, over the final three months. The relative outperformance of international markets compared to domestic stocks in the fourth quarter, shown in the graph below, has happened very infrequently over the last decade plus. 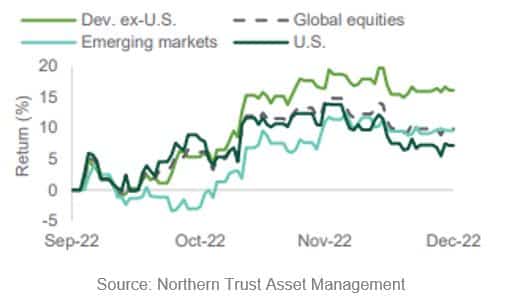 Conservative investments, like bonds, can help stabilize portfolios when stocks are volatile and weak. Not so in 2022. Last year, many major bond market indices were down double-digits. Among them was the benchmark Bloomberg Barclays U.S. Aggregate Index, which returned -13.0%. Like with stocks, key contributors to the bond market weakness included high inflation, central bank tightening, and rising interest rates (rates and bond prices move inversely). The result was one of the worst years in recent history for the “traditional” 60/40 stock/bond portfolio. 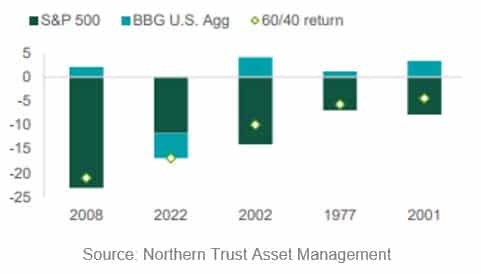 Inflation remained a key topic throughout last year, though the term “transitory” stopped being used to describe it. The current cycle’s peak was likely (hopefully) the 9.1% year-over-year June consumer price index (CPI) reading. Fourth quarter CPI reports have thus far come in below consensus expectations, with year-over-year inflation readings in October and November of 7.7% and 7.1%, respectively. December data will be released January 12, with expectations for a level somewhere between 7% and 8% for calendar year 2022.

The Federal Reserve has been very transparent, in both rhetoric and resolve, that of its dual mandate of maximum employment and price stability, the focus is on the latter. The Fed raised its target rate a total of seven times last year, by 4.25%. Whether it’s a tightening or relaxing initiative, it is rare for the Fed to adjust the fed funds target rate by more than 0.25% at a time, yet it did so on six straight occasions last year from May to December. The timing of the shift in Fed policy aligned closely with a broad recognition that this inflation cycle was not going to be transient.

According to the National Bureau of Economic Research, considered the official authority on economic cycles, the U.S. narrowly avoided a recession in the first half of last year. It did so even while experiencing two consecutive quarters of negative gross domestic product (GDP) growth. Historically, successive quarters of negative GDP growth have often coincided with recessions. Economic growth turned positive in the third quarter, with the final GDP estimate coming in at 3.2%.

Ironically, as GDP growth turned positive, other economic indicators weakened quite considerably as the year progressed. Perhaps most notably were the Purchasing Manager Indices (PMI). PMI surveys measure the prevailing direction of economic trends, and are leading indicators of overall economic activity. They are conducted monthly and include over 400 companies and 19 industries, covering both upstream and downstream activity.

As evidenced in the data below, both the manufacturing and services sectors of the U.S. economy weakened over the last 12 months. Notably, the headline number for the manufacturing segment dropped below 50 in the most recent report. A PMI reading below 50 is indicative of contracting economic conditions.

To end on a positive note, one thing that has no doubt helped the U.S. avoid an “official” recession has been consistently good employment data. Last month the economy generated 223,000 new jobs, ahead of expectations. Better than expected jobs gains was a fairly consistent theme throughout 2022, which has allowed the all-important consumer segment of the economy to remain on a growth track.

The unemployment rate fell to a cycle-low reading of 3.5% in December, while wage growth slowed a bit from the previous month. Lower wage growth is a positive on the inflation front. Should it continue, it improves the chances of the Fed steering the economy toward a soft landing, at best, or avoiding a severe recession, at worst. In either scenario, a repeat of the lousy market conditions of 2022 will be diminished, which should make investors optimistic for a better 2023, even if cautiously so.

This material is prepared for informational and educational purposes. It is not and should not be interpreted or relied upon as financial advice, a recommendation for the purchase or sale of securities or other financial products and services, or for tax, legal, or accounting advice. We make no representation as to the accuracy or completeness of the information. With respect to information regarding financial performance, past results are not an indication of future performance. Please know that investment products are not FDIC insured, not bank guaranteed, and may lose value. You should consult your professional advisors regarding the matters discussed herein and your own individual circumstances before taking or declining to take any action which may be relevant to this information.

Plan for a stronger financial future.

Learn how Park National Bank can help you build a retirement plan that meets your needs.

Tips for updating your business plan

Investing for the future Planning for retirement

How we manage our investments is one of the most important financial decisions we make.… 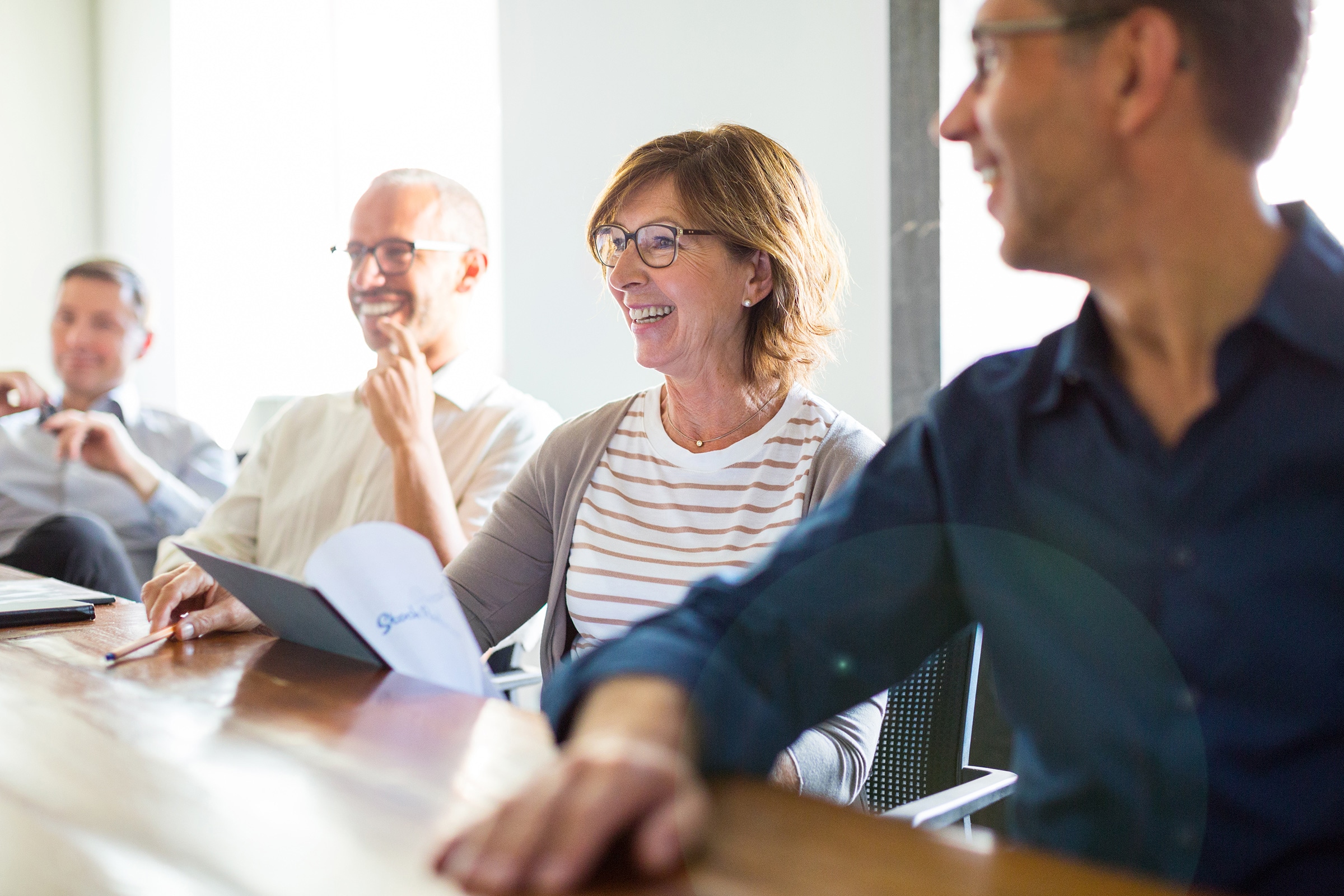 3 benefits of our retirement plan services

It can be tempting when you change jobs to cash out your 401(k). The temptation…